Entrepreneurship, Work and Action in the Anthropocene Workshop 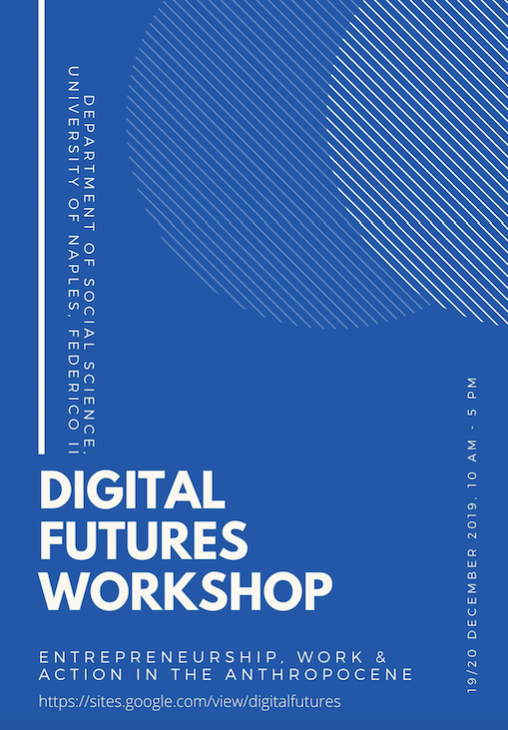 The world needs changing. Virtually all serious observers agree that if we go on like this, the future will be grim. But what to change the world into? As of yet, nobody has envisioned a viable alternative to a social model in what appears to be terminal decline, much less any realistic strategy for confronting an ecological crisis of potentially game-changing dimensions. Indeed change seems to happen in novel and as of yet unexplored ways. Collective organizations held together by strong social bonds and enduring commitments are replaced by ‘connective’ manifestations of loosely connected individuals and groups that and partake in momentary intensities, like FridaysForFuture.

The old distinction between work and civic action is collapsing as more and more people understand their economic activities to have civic or political implications as well. Entrepreneurship, always a feature of social movements is now becoming the main way to ‘change the world’ as social enterprise along with new technologies, like blockchains empower a new ‘industrious’ economy oriented to civic as well as economic goals. Progressive perspectives are replaced either by apocalyptic vision of civilizational collapse or a turn to the immanent practice of everyday survival, possibly with a hint of nostalgia for a, by now , long lost modernity.

This two day workshop wants to create a space for reflection on the changing relation between entrepreneurship, work (or economic activity more generally) and civic or political action. We want to explore what is going on, and where it might lead us. It features invited book presentations as well as four plenary sessions featuring four papers each where we invite scholars to present their work in progress.

The plenary sessions are:

– Organizing for the Climate, new forms of political mobilization in the (early) Anthropocene

– Blockchains, Industry 4.0 and the political promises of technology.

– Social Innovation as practice and Ideology.

– What lies ahead, the future between hope, despair and nostalgia.

This website uses cookies to improve your experience while you navigate through the website. Out of these, the cookies that are categorized as necessary are stored on your browser as they are essential for the working of basic functionalities of the website. We also use third-party cookies that help us analyze and understand how you use this website. These cookies will be stored in your browser only with your consent. You also have the option to opt-out of these cookies. But opting out of some of these cookies may affect your browsing experience.
Necessary Sempre abilitato
Necessary cookies are absolutely essential for the website to function properly. This category only includes cookies that ensures basic functionalities and security features of the website. These cookies do not store any personal information.
Non-necessary
Any cookies that may not be particularly necessary for the website to function and is used specifically to collect user personal data via analytics, ads, other embedded contents are termed as non-necessary cookies. It is mandatory to procure user consent prior to running these cookies on your website.
ACCETTA E SALVA